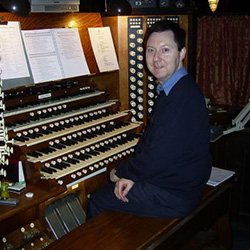 Mark Quarmby graduated from the Sydney Conservatorium studying organ under Norman Johnston and piano under Marjorie Hesse. He has given recitals throughout Australia, Europe, North America, Asia and New Zealand. For over 20 years he was associated with the music of St Andrew’s Cathedral, Sydney, playing the organ for national live broadcasts, visits of the Queen, funerals of State governors and national memorial services. In August 2009 he was appointed Director of Music at St Stephen’s, Macquarie Street.

In Europe he has played in the Cathedrals of St Paul’s, London, Canterbury, Salisbury, Oxford, Winchester, Lichfield, Westminster Abbey plus Notre-Dame, Paris, with recitals in Germany, Switzerland, Austria, Italy, France, and Holland. In 2009 he gave the opening recital of the American Guild of Organists Convention in Phoenix, Arizona, playing a whole program devoted to organ music written by Australian composers.

He has been the President of the Organ Music Society of Sydney, has served on the committee of the Royal School of Church Music (NSW) and is currently a National Director of the Organ Historical Trust of Australia and teaches piano, organ and musicianship at St Patrick’s College, Strathfield, and privately.

Wilbur Hughes was born in Sydney, Australia, in 1941.His ambition since the age of six was to be a professional organist. He received initial musical training on the piano from his mother, and culminated in gaining the A.Mus.A in piano in 1963, while studying with Dallas Haslam at the Sydney Conservatorium of Music, coincidentally with his undergraduate medical studies.

Since the age of 12, he had been self-taught on the local church pipe organ, ultimately receiving lessons at the age ot 16 from local church organist, Roy Williamson.

After completion of his piano diploma, he commenced singing training and studied organ for many years with Norman Johnston at the Sydney Conservatorium. During this period he was organist and choir master at several Sydney Churches, St Philip’s Eastwood, St. John’s Beecroft, and St Anne’s Ryde.

In 1967, while undertaking post graduate medical studies in Haematology, he gained the L.T.C.L., and was appointed in the same year as Director of Music at St John’s Pro-Cathedral at Parramatta near Sydney. In 1969 he gained the F.T.C.L. in organ.

In subsquent years he took up studies with David and Christa Rumsey, and received valuable guidance from Sergio de Pieri, Keith Asboe, and Peter Planyavsky.

During periods overseas, he studied with Ver Hasselt (St Gervais, Paris) and Peter Hurford in London, and more recently at the Kirchenmusikschule in Spandau, Berlin. He also attended the Haarlem Organ school where he was involved in tutorial classes with Anton Heiller. In 1999 he attended the organ school in Alkmaar, Holland. He has given organ music recitals in Sydney, Ulm, Günzburg, Berlin, Venice, Spain, London, Paris, Las Pinãs, and Manila.

Recently he has retired from his medical career and has devoted his attention entirely to music, and in 2003 gained a B.Mus. Hons. at the University of London in Composition and Musicology.

His great passion is 17th and 18th Spanish Organ Music, as well as the original instruments of Gottfried Silbermann in Saxony. 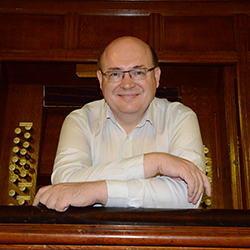 Kurt Ison is one of Australia’s leading organists. He was educated to postgraduate level at the Sydney Conservatorium of Music and then had some private lessons in Paris and Bologna.

He has given solo organ recitals in some of the world’s most prestigious venues including: Notre Dame Cathedral Paris, St Paul’s Cathedral, London, Westminster Abbey, Washington National Cathedral, St Thomas’s Fifth Avenue New York City and the Hong Kong Concert Hall. He has also presented concerts in the Sydney, Brisbane and Adelaide Town Halls and cathedrals in Sydney, Melbourne and Brisbane.

He has been on several concert tours to Europe, including an invitation from the Australian Embassy and Croatian Consulate to perform a series of concerts in Croatia.

Kurt has taught organ for many years and has had students go on to study at a tertiary level both in Australia and at the world-renowned Eastman School of Music at Rochester NY. He taught theory as a peripatetic tutor for many years at MLC School Burwood, where he also helped HSC students with performance practise and composition tasks.