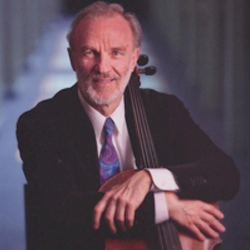 Danish cellist Georg Pedersen has given well over 3000 concerts in 24 countries, has recorded on 12 different labels, and is broadcast all over the world. He studied in Copenhagen with Geisler, In Paris with Tortelier, and in Los Angeles with Piatigorsky. For eleven years he was Solo Cellist with the Royal Danish Philharmonic – Det Kongelige Kapel – regarded by Karajan, Bernstein, Celibidache, Rozhdestvensky, Kleiber, Markevich and Klemperer, as being amongst the ten best orchestras in the world. During this time he was also a member of the Copenhagen Chamber Soloists and the Dania String Quartet.

After university positions in Auckland, Adelaide and Melbourne, Georg Pedersen has been at the Sydney Conservatorium of Music, Sydney University, since 1985. An internationally sought after teacher, his students regularly win top prizes in international, national and state competitions, as well as in Eisteddfods, and go on to study with the best teachers in the world. His students are professors and principal cellists at leading schools and orchestras in Europe, America, Australia, New Zealand and Asia. Georg’s younger students have full music scholarships at all the best private schools in Sydney, such as Sydney Grammar, MLC Burwood, PLC, St Andrews, Knox Grammar, Scots College, etc., and they arrive from all capital cities to study with him at the Sydney Conservatorium of Music, the Conservatorium High School and in the Rising Stars Programme.

Georg has taught in National Summer Music Camps and Schools in Denmark, Australia, New Zealand and Hong Kong. His teaching combines the Scandinavian, Russian and French schools, with roots going back to Feuillard, Casals and Klengel. Pedersen has created his own teaching material, to fill in the gaps in existing material, in a concise and comprehensive manner. He is regarded as being at the cutting edge of artistic and pedagogical research and is much in demand internationally. In 2011 he gave masterclasses at the Juillard School in New York, Northwestern University in Chicago and at the International Cello Festival in Adelaide. In 2012 he will be in Los Angeles for the Piatigorsky International Cello Festival at the University of Southern California Thornton School of Music. 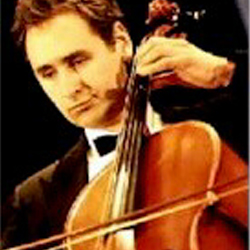 A graduate of the Sydney Conservatorium and a Fellow of Trinity College of Music London, Warrick is recognised internationally as a leading figure in music performance & education. As a cellist, he has performed throughout the world including performances as guest Associate Principal Cellist of the University of Adelaide Cello Ensemble on their acclaimed tour of Russia, Germany, Italy and Serbia / Croatia and with the International Opera Festival for their performances of Aida in Tokyo Japan.

Warrick first started his cello studies here in Australia with Colleen McMeekin at the age of six before going on to complete advanced studies with Russian cellist Alex Pogodin ( of the Russian / Manchurian School which descended directly from the great Russian cellist Anatoly Bradukov ) and acclaimed Danish cellist Georg Pedersen ( a former student of Paul Tortelier ). During his time as a student at the Sydney Conservatorium Warrick was invited to play in performances with the Sydney Symphony Orchestra and was also a prize winner in the ABC Conducting Competition which saw him conduct the ABC Sinfonia in the Concert Hall of the Sydney Opera House. On returning to Australia after scholarship studies at the Royal College of Music London with Joan Dickson and also in France with Maude Tortelier and Andre Navarra, Warrick has established himself as one of Sydney’s leading cello teachers, sharing the joys of cello playing in recent years with both his private students and students at many of Sydney’s leading private schools including MLC School, Meriden, PLC Sydney and Shore Grammar School. Currently most of his teaching is conducted at his own School for Strings located at the heart of Sydney’s inner west education belt in Croydon, approx. 15 minutes from the CBD. Warrick’s cello students have often been awarded prestigious Music Scholarships at Sydney Private Schools including Newington College, MLC School and PLC Sydney covering their academic fees for Years 7 to 12.

Warrick is also a qualified lawyer who holds a Master of Laws degree from the Australian National University in Canberra. Along side his musical activities, he has a particular interest in Internet and Media / Communications Law and also Animal Rights Law.

Heather Stratfold graduated in 1986 with First Class Honours from the Elder Conservatorium of Music (Adelaide) having studied with Kurt Hess, a teacher of Swiss origin and former pupil of Janos Starker. Whilst still a student Heather played professionally with the ABC orchestras and chamber orchestras in Adelaide and commenced her cello teaching career working in schools, for TAFE (S.A.) and as a private tutor.

She moved to London in late 1986, after undertaking a European tour with the acclaimed University of Adelaide Cello Ensemble of which she was a founding member. She continued her cello studies with Christopher Bunting, former pupil of Pablo Casals, and later with Karine Georgian, former pupil of Rostropovich. She attended and participated in masterclasses at the Dartington International Summer Schools, the Manchester International Cello Festival and at the Aldeburgh Festival.

Heather’s performing career in London spanned a wide range of musical genres from the Symphony Orchestra and Opera Orchestra, West End shows, various chamber groups including string quartets and cello duo to work as a session cellist for jazz/pop recordings and videos.

Since her return to Australia in 1996, Heather has been based in Sydney. She continues her performing career on a freelance basis within a broad variety of musical genres, most recently branching out into composition, jazz cello and work in the theatre ( acting, playing and singing ). Heather is a teacher who gives her all and has a unique ability to inspire others with her enthusiasm and passion for the cello. In her own time, Heather practices meditation and yoga, enjoys reading and joke telling. 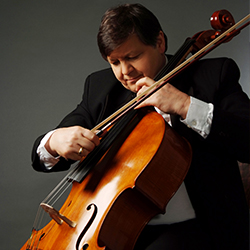 Ljubo Oblikov began studying the cello at the age of nine in his native Bulgaria, attending specialist Music Schools and the Sofia Conservatorium where he completed his Bachelor of Music Degree in 1977. He gave solo recitals and performed regularly as a member of various orchestras and chamber ensembles including the radio Sofia Orchestra, Russe Philharmonic, Gabrovo Chamber Orchestra and two chamber orchestras formed specifically for performances and competitions in Italy and West Berlin, where he met his future wife, Australian flautist Jane Bolinowsky.

Upon arriving in Melbourne in 1981, Ljubo worked as a freelance cellist and teacher before accepting positions as lecturer in cello and solfege at the Darling Downs Institute of Advanced Education in Toowoomba (University of Southern Queensland), Principal cellist of the Darling Downs Sinfonia and cellist in the Queensland Theatre Orchestra. During this time he also performed as soloist with the Sinfonia and gave regular recitals.

In 1987 Ljubo moved to Sydney where he joined the music staff at Newington College and became a member of the Henley String Quartet. In 1991/92 he gave solo performances in England , Spain, France, and Switzerland as part of a tour undertaken by Newington College and in 1993 he completed a Graduate Diploma in Performance at the Sydney Conservatorium of Music.

Production of his CD Reverie has lead to a number of invitations to give recitals in and around Sydney and in Santiago, Chile. The CD has been broadcast on several Sydney radio stations.

Currently, Ljubo is the President/Music Director of the Hills District Music Club. 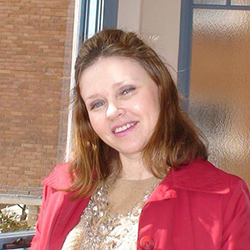 Luda Tees (aka Reznikov) completed her musical education overseas in Odessa Ukraine (formerly Russia) in 1982 at the Conservatorium of Music at Odessa.

Throughout her career in music she has been engaged in teaching many students and been responsible for their regular performances and co-ordinating their study program.

Since 1993 she has been performing with various Chamber groups as part of a Trio and a String Quartet as well as having been a former member of the East West Orchestra in Sydney.

For some years Luda taught Cello at Waverley College (until 2004) and still teaches at Trinity College in Summer Hill and other schools. Luda is also a former staff member at the Australian Institute of Music, McDonalds Performing Arts College and SCECGS Darlinghurst. Luda offers tuition both on a traditional basis and by use of the Suzuki method. A number of her students have been awarded first prize at various Eisteddfods and have also been granted music scholarships at Private Schools in Sydney.

Luda presently also teaches regularly from her studio in the Eastern Suburbs of Sydney and also performs regularly with the Aurora String Quartet and the Modern String Quartet. In addition, Luda specialises in tuition for adult students and beginners. 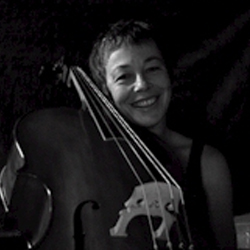 Clara Blazer completed a Bachelor of Music at the University of Sydney ( major in piano performance ) and a Graduate Diploma of Education in 1979. Clara also studied cello with Colleen McMeekin and Algimantas Motiekaitis during her undergraduate years. In 1981-82, she studied cello with Jerome Jelinek at the University of Michigan, Ann Arbor after being awarded a Graduate Rotary Fellowship.On her return to Australia,as well as working as a freelance cellist , a year was spent with the ABC Training Orchestra. Clara has held teaching positions at The King’s School, Ravenswood School for Girls, Waverley College, Emanuel School and Chatswood Yamaha Centre and has conducted and tutored string groups for the Western Youth Orchestra and local primary schools. Presently she runs a busy private studio in Newtown.

In 2004 Clara completed an Honours year at Sydney University ( major in baroque cello performance ), having studied with Tim Blomfield. In the same year she joined the baroque all female vocal ensemble “The Tall Poppeas”. Clara is a founding member of “Suonare”, an instrumental ensemble specialising in exploring the baroque cello sonata repertoire. 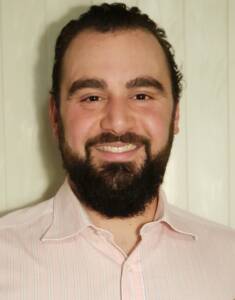 George is an experienced cello teacher whose passion for music is reflected in his students.  He is a graduate of the Sydney Conservatorium of Music and studied Cello under Georg Pederson. As a cellist George has been part of a number of youth orchestral programs and session musician and is currently embracing the joys of classroom music teaching at Homebush Boys’ High School. He is able to cater to his student’s needs, and pursuits in AMEB examinations. Specialising in Classical and Romantic styles of Cello repertoire, George will endeavour to bring his students into the next phase of their cello journey. 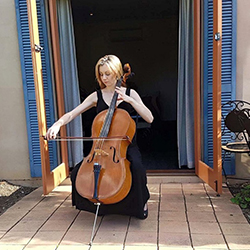 A postgraduate candidate of the Sydney Conservatorium of Music, Marleen is completing her Masters of Music (Performance) in the class of Danish cellist, Georg Pedersen. She has studied abroad in France, Austria, and Belgium, with international cellists Maria Kliegel and Robert Cohen at the 2010 Euro Music Festival. Throughout her undergraduate degree, Marleen toured extensively throughout Australia and Asia with electric string trio Maske, and has performed in masterclasses with Hans Jorgen Jensen of Northwestern University, Chicago. She is a casual member of the seasonal Australian Symphony Orchestra, under the baton of Maestro George Ellis, where she has shared the stage with artists Paulini Curuenavuli and Jeff Duff. Earlier this year, Marleen was cast for the SBS television series ‘Dead Lucky,’ and has also appeared on the 2012 series of X-Factor, accompanying singer Guy Sebastian.

A keen educator, Marleen teaches cello and music theory forty hours a week at Parramatta Cello School. She has previously taught at The Pittwater House School, Tara Anglican Girls, Carlingford West Primary School, and the Sydney Youth Symphony Orchestra. The past two years have earned Parramatta Cello School a blue ribbon at the Penrith Eistedfodd in the open quartet division, and in 2017 select students were invited to join the Sydney Symphony Orchestra for “Symphony Under the Stars” in Parramatta Park. Marleen’s students range from primary aged children to adult beginners who periodically form chamber groups and cello ensembles. The thesis for her Masters’ degree will investigate the effect of ensemble on pedagogical development and motivation in adult beginner cellists.

Marleen plays on a Dutch cello made in 1790, and a gold mounted Jeffrey Ellis bow.